Not quite a pimpmobile…

…but it’ll do for now.I’d mentioned to a few people (and may have on here as well) that I was looking into getting a bike for getting around and getting to know Tokyo better. Well, I finally took the plunge today. And here’s what I got: 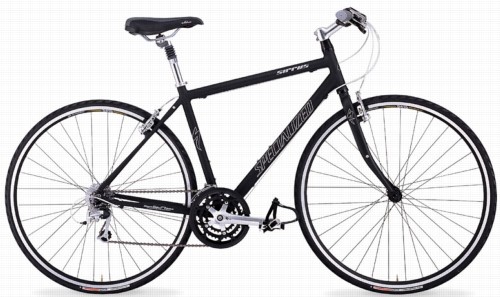 Well, almost. That’s a 2005 Specialized Sirrus and mine is a 2004. But they look exactly the same. It’s a hybrid-style bike, with a mountain bike shaped frame and road rims, tires and gears. It’s nice and light.

I got it at The Sports Authority in Akabane, right by my train station. They had a batch of 2004 bikes on closeout and this was one of them. I went in tonight intending to buy this one, but still almost ended up with a mountain bike. I liked some of the MTBs they had, and since they’re what I’ve ridden for the last 15 years or so, they’re what I’m most comfortable with.

That may change, though.

I like MTBs because I can hammer the holy hell out of them, jumping off curbs, barreling down hills and doing lots of other stuff that would crush normal bikes. Well, you can’t do a whole lot of that in Tokyo. For one, you don’t have to hop onto or off of curbs. They’re all slanted down to within a few centimeters of road height at intersections and corners.

I always liked launching off curbs and bouncing up onto them, but there’s no need (and not many places) to do that here.Also, Tokyo’s pretty flat. Speed matters, provided nobody’s in your way. Most people on bikes here ride on the sidewalks, which has to suck, since they’re crowded with pedestrians and other cyclists. And most everybody here has a one-speed granny bike, so they’re only going but so fast. My bike has 24 speeds.

I will not be spending too much time on the sidewalks.

I rode home from Akabane tonight and did it in about the same time it would’ve taken on the bus. And this was my first time riding in Tokyo. And it was dark. And I wasn’t 100% sure of the route. Had I been on the sidewalk with a granny bike, who knows how long it would’ve taken. Instead, I just stayed in the street and hauled ass. Much more effective – and fun!

This bike is a lot quicker than any MTB I’ve ever owned, even if I’d put slick tires on them. The gearing on this bike, combined with the light weight (although hindered by my weight) and road tires, makes for one speedy ride. I’m going to have to pick up a bike computer so I can keep track of my speeds and how much riding I do.

I’m not swearing off MTBs altogether, mind you. I’ll always lust after a nice one. I spent a bit of time in the store tonight tapping the frame of a carbon-fiber full-suspension bike (on sale for only $1600), just to hear that nice, clinky sound it made. I doubt I’ll buy a bike like that anytime soon, but if the need to go out and abuse my bike (in a fun way, of course) begins to get too strong, I may have to become a two-vehicle family.