Free with your orange juice purchase.

As shown by this past weekend’s events, earthquakes are a fact of life in Japan. A big one, and possibly an everyday one. It’s wise to be prepared for them, but if you worry about every slight tremor being “the big one” you’re going to go crazy in no time at all. But you shouldn’t be totally complacent either. Earthquakes can be serious, and you should have some way of immediately gauging their intensity, beyond your own “pucker factor.”

That’s why I’m glad I got my very own Earthquake Detection Kit with the orange juice I bought tonight: 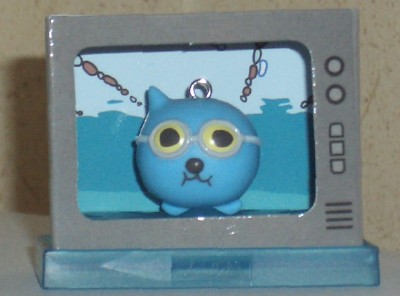 I bought a big bottle of Qoo orange juice and the kit was in the “freebie” bag attached to the neck of the bottle. I know what you’re thinking. Probably something along the lines of, “Drew, you’re full of shit,” or “that’s just a useless lump of plastic.” Au contraire! Let’s take a closer look, shall we? 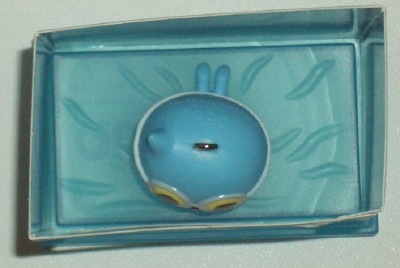 As you can see from this overhead view, Qoo has a rather large head, and a very tiny body. His swimming posture and the base he’s resting on make him even more dangerously top-heavy, which makes him wonderfully suited to his task of earthquake detection. A slight tremor probably wouldn’t phase him, but a large one definitely would. I couldn’t read the instructions for the kit (what with them being in Japanese and all), but I imagine they play out something like this:

If Qoo is swimming happily, be calm and enjoy your time with him.
If Qoo has changed position, but is still in the water, all is well and you should not worry (too much).
If Qoo is no longer in his TV set, look for him later and seek a safe place.
If Qoo is not visible due to his TV set being buried under rubble, do not worry about him. Instead worry about the remaining pieces of your roof doing the same to you as they did to him.

You see, it’s something akin to the “weather rock” method of forecasting, which has been a valid method of meteorological prediction for a long time. No reason why it can’t be applied to new fields. I applaud Qoo and his people for making such a device available to the public for free (with required juice purchase).

I don’t know how many lives Qoo will save, but if he saves just one, isn’t it worth it?

In future posts regarding quake activity in Tokyo, I will no longer quote my Nooper mails about “epicenters,” “richter scales” and other outdated methodologies. Instead I will give quake reports based upon the Qoo System. Has Qoo shifted position? Is he in his TV set? Has he traveled to another room of my apartment? These questions (and other as yet unforeseen ones) will be answered, along with valuable photographic evidence of Qoo’s activity.

Keep your eyes peeled for the first ever QQR*, coming soon! (maybe)