That’s what I thought when I first heard the term. It still doesn’t make much sense to me, but it beats the hell out of the alternative: “hoodie”

I don’t know who came up with “hoodie,” but they should be shot. Yes, it makes a bit of sense as a shortened form of “hooded sweatshirt,” but it just sounds dumb to me. Way too teeny-bopperish.So where does “bunnyhug” come from?

I was telling a friend of mine who lives in Saskatoon, Saskatchewan about some clothes shopping I’d done, and when I mentioned how much I liked my new sweatshirt, she was all, “oh, you mean a ‘bunnyhug.'” Which is when I said, “WTF is a ‘bunnyhug?'” She explained that it was a Saskatoon thing, and that it’s only been recently discovered there that most of the world doesn’t use that term.

But you know what? The rest of the world should.

It would add a bit more color (and silliness) to things. It would make Eminem’s “Mosh” video much more interesting. Think about it – his army of fans marching together, not in black “hoodies,” but in their bunnyhugs!

That would SO rule.

My new one’s not black, but it is very, very comfy. See? 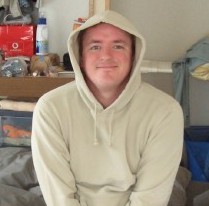