And most of them have been crap.

Yes, there are the occasional gems – Knights of the Old Republic, Tie Fighter, Rogue Squadron II – but pretty much any title based off one of the movies hasn’t really been worth playing. 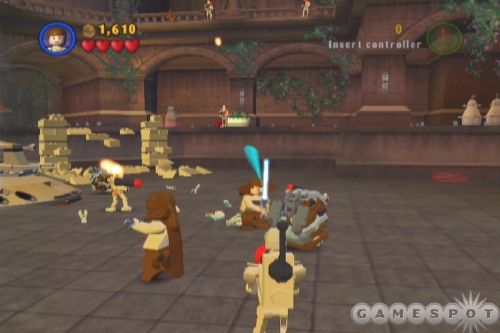 It may sound like a silly idea, but bear with me on this one. The game takes bits and pieces from the three prequels – the good bits and pieces – and strings them together in a fun little game. You won’t find any hamhanded sappy dialogue or wooden acting, but you will find some decent action, platforming and a bit of puzzle solving.

There’s no voice work, aside from the occasional scream when a character breaks into its component bits. The sound effects are right out of the films, so they’re right at home. The graphics are pure Lego though, and are very entertaining. When things break, they fall apart into individual brick pieces.

That goes for characters too.

Each character (well, the bipedal ones) are based on Lego minifigs and follow the same sorts of rules kids would lay out when playing. The best example of this is Darth Maul’s bisection by Obi Wan in Episode I. When Maul gets cut in half, his upper body tumbles down whatever that shaft was supposed to be, and a pair of black minifig legs (complete with twin bumps on the top) are all that’s left of him.

There are a lot of moments like that in the game, as well as some Star Wars in-jokes. There’s a fair bit of Lego-based humor too, and it’s all good stuff. If you’re a Lego fan, or a Star Wars fan (and odds are there’s more than a little crossover with those two groups), you owe it to yourself to at least give it a rent.

And with a two-player co-op mode, there’s no fighting over who gets to play next, since you and a friend can play at the same time.

(Of course, if you’ve got more than one friend, you will have to take turns… ^.^)